My WHY: Leading by example

DUE TO ADVERSE WEATHER CONDITIONS, GEORGE WILL NOW DEPART FROM GANSEY POTTERY AT 6AM, WITH AN ESTIMATED ARRIVAL TIME OF 8:45 – 9:30 IN CASTLETOWN HARBOUR

Last week we caught up with local lad George Blackwell who is swimming a whopping 6639 meters from Castletown to Gansey, in aid of mental health charity CALM. The 6639 meters he is swimming reflects the number of men who commit suicide every year in across UK.

Mens mental health is slowly becoming regarded as something to be discussed, with over 75% of suicide deaths recorded in the UK being male.

It is commonly known a majority of men do not feel comfortable discussing anxiety, depression and any other personal issues they may be going through, and a service that provides support for men to do so is very well worth supporting.

Ahead of the swim this Saturday, George explains his motivations behind the swim and why he’s so passionate about the charity he is supporting.

“Mental health is something that has always been close to the family, as well as personally having had some low-key struggles myself.

The more you talk about mental health and suicide, which is still such a taboo subject, the more you become aware of others that have been affected.”

In the candid video, George talk more about his own struggles in the first in a series of Headland vlogs discussing mental health.

We’ll be cheering George on from the start and finish line, stay tuned to Gef’s Instagram story and George’s own at @my1ornjourney for updates across the day.

If you’d like to cheer him on, he’ll be setting off from Castletown breakwater at 12:40 this Saturday (28th July), he anticipates the swim will take him 2.5 to 3 hours, so is expecting to arrive in Gansey somewhere between 15:10 and 15:40.

If you’d like support George in his campaign you can do so by heading to his just giving page here.

If that’s not your style, he is accepting cash donations in to via bank transferring, which will be transferred to the JustGiving page – confirmations of the transfer will be sent to you afterwards, email [email protected] and he’ll send over the details. 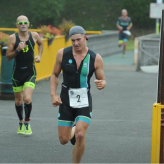 Just giving it a go 🇮🇲